It all began in the tranquil town of Ellwangen, Baden-Württemberg, south-west Germany. While the surroundings create the impression of a peaceful, hilly landscape that tourists like for hiking, the story of the band starts with a man whose musical ideas don't have anything in common with his idyllic hometown. He wants to shake the stage with his songs and give shivers to Teenagers corrupted by modern pop music - Elmo Lewis wants to play rock 'n' roll, hard and loud. And he's not new in the scene. Experienced in songwriting, strumming the six-string and banging on the four-string, he’s rocked in several of formations. He's hot to prove his profession again in a new band.
In the spring of 2015, his singer "Blossom" went her own way and he realizes that the moment is right to get started with his own songs. Elmo knows, he needs a straight, steady band to do it. And 'till he gets there, not much time should pass. His first companion he meets in his favorite guitar shop. A young guy at the age of 15, by the name of Tim Heisel, is just strummin’ his Les Paul like a maniac and hammering out solos like a pro. Elmo knows: This is what I need. Jointly they set the floor on fire and decide to search for a couple more combatants.
Now the first step is taken and the lead section with Elmo's vocals and Tim's six-string solos is born. But as we know, you can't punch the audience's diaphragm nor give the stage a heavy shake when the fat bass is missing. For this objective, the right man is found quickly … but at the time, he's still in the Australian outback located under a big Akubra estmating the milage to the next road house on his dusty map. Being also responsible for playing the bass guitar in the brothers' "Prologue Noise" band, Tim's brother Bernd Heisel comes back after a half a year from the Down Under, joins the two rockers and they play 'till the walls start bending.
But as the band is only truly completed when concrete pillars crumble, a fair bit of rhythm has to top off the formation. Through a small classified ad, Mike Sorel finds his way to the three eager musicians. He's an original American whose quick moving hands beat up the snare and cymbals until they’re begging for mercy. He knows what handmade Rock 'n' Roll needs: Lots of toms and no shortcomings on the bass drum. Mike is exactly the right one for the band and finally all the members of the band are unified.
The group knows that everyone fits in the band and musically, they could have understood each other blindfolded since the very first jam sessions. After a few weeks, the first gig comes into view. A name for the band has to be found. Taken from Elmo's former band, "White" from Elmo's civil name, and "Blossom" from his former singer, these are the elements for the band's name: White Blossom Project. 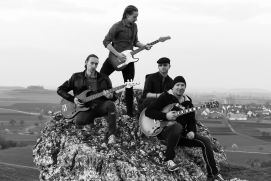 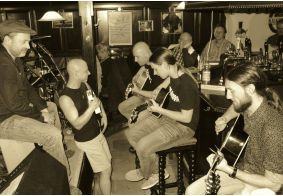 These are the guys from White Blossom Project 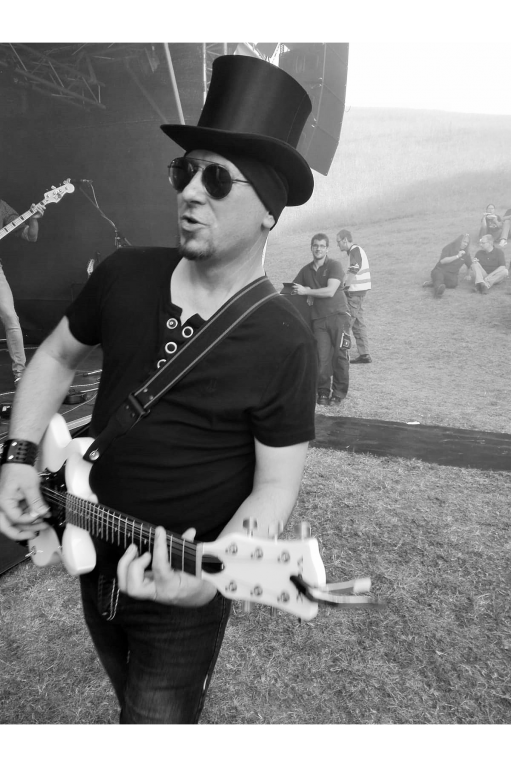 Elmo Lewis, a 48 year old rocker and stage veteran who has performed in several different bands and projects since 1990 such as Chippendales, Frontal, A.C.H. and Sweet Spot. As guitarist and bassist, he was influenced by the styles of the Rolling Stones, Led Zeppelin, U2, Red Hot Chili Peppers, The White Stripes, but also by blues and Rock 'n' Roll roots like Chuck Berry, B.B. King and Johnny Lee Hooker. But strumming the strings is not all Elmo is familiar with. In WBP he is also the lead vocalist and plays the blues harp as well. The greater portion of WBPs songs are forged in his head and then brought to paper. In reality, he's more like an introverted family man who's sometimes on the road with the inimitable sounds of a Moto Guzzi - basically just as with White Blossom Project. His motto: Don't do anything illegal, but if you do it anyway - don't get caught. 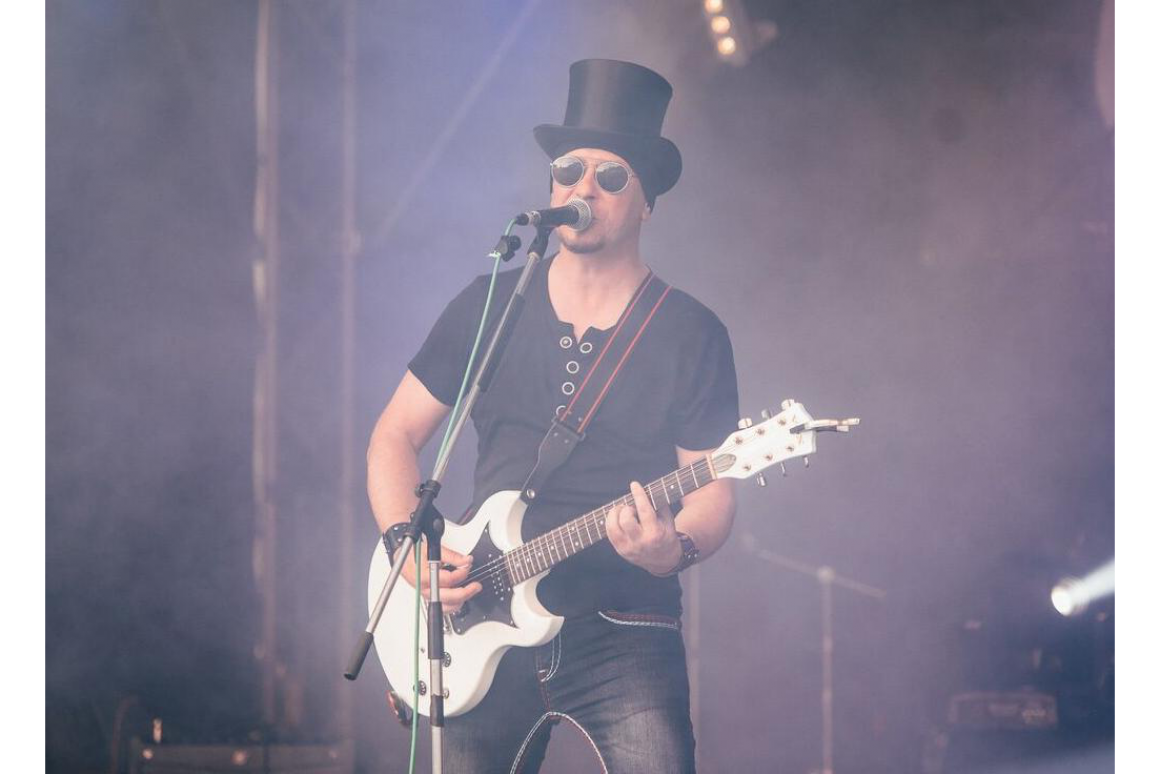 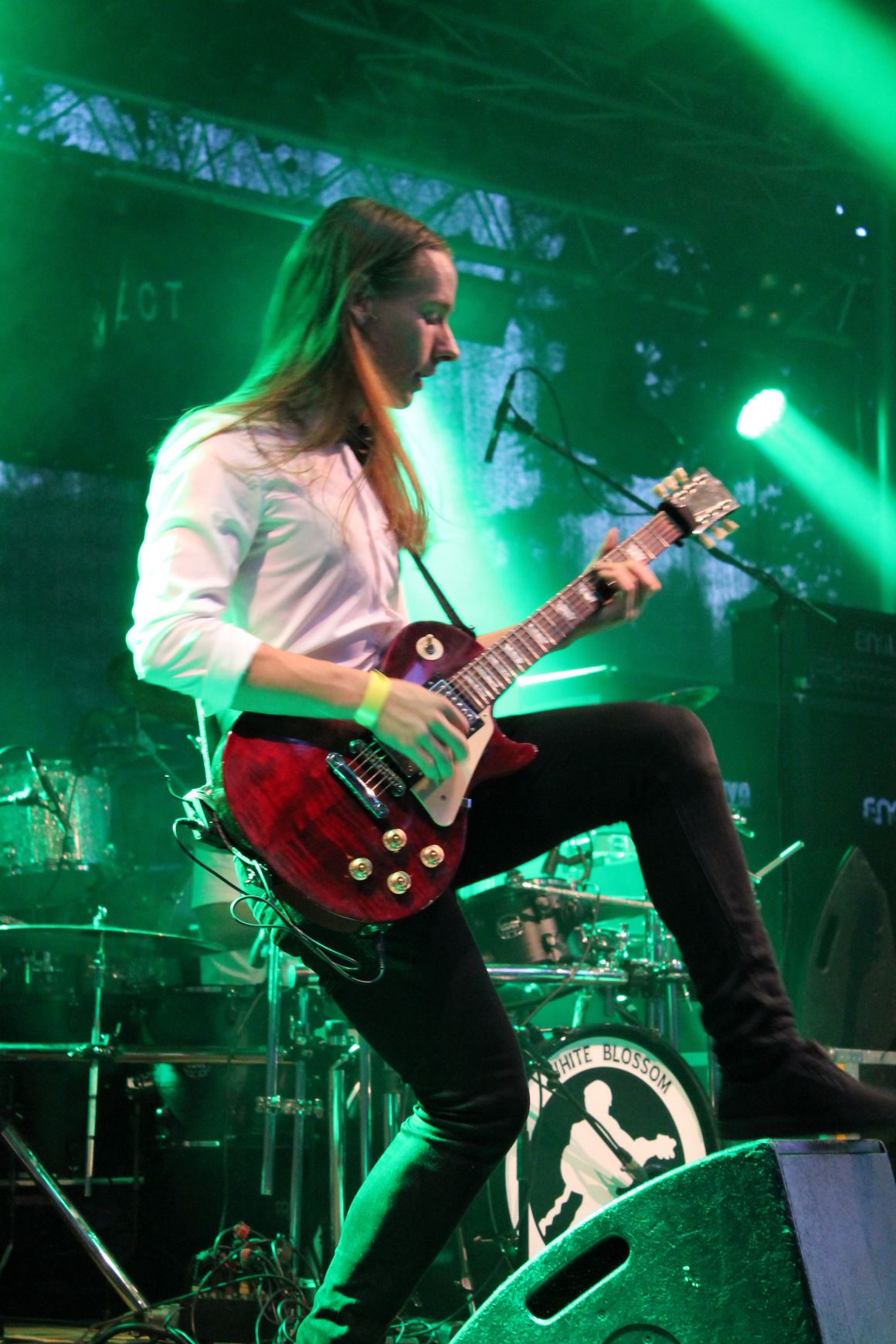 Tim Heisel is 18 years old and professionally learning the ins and outs of sound engineering. After a few starter lessons on the piano, he decided to switch over to the classic guitar at the age of nine. Shortly thereafter, the e-guitar followed and is now his loyal companion in White Blossom Project. At first, Tim was inspired by AC/DC and such classic rock bands, however he rapidly aimed for higher goals and playing proficiency and is now influenced by artists such as Guthrie Govan, Steve Vai and John Petrucci. In White Blossom Project, Tim’s main job is to push out jaw-dropping guitar solos, one after the other, which he does in a more than in complimentary fashion while bending the hell out of the strings. But aside from that he takes care of back-up vocals and enjoys the now and again rotation to the bass guitar or the drums. When the band meets at the home studio where the White Blossom Projects songs and albums are produced, Tim takes over the role of the sound engineer and makes sure that the recordings turn out as desired. Tim Heisel is also well known for his two-man-band „Prologue Noise“ together with his brother or in other bands like "The Big Splash". 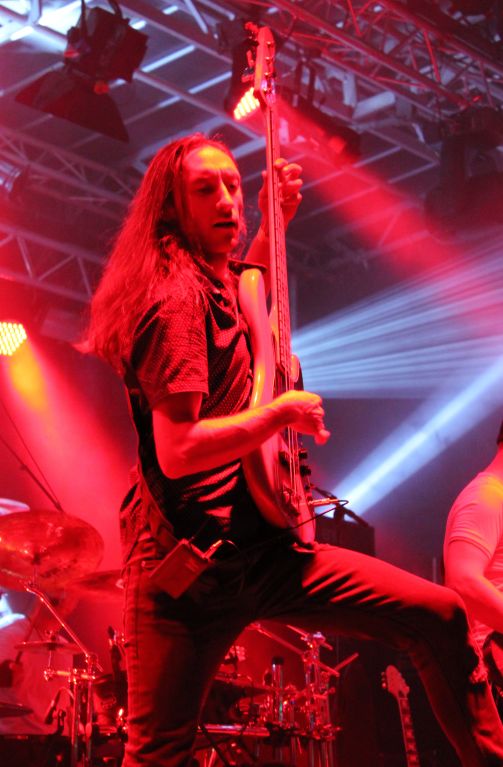 Bernd Heisel is 25 and studies. He's from Frankonia, Bavaria, where he took his first steps as a musician at the age of seven when he began learning to play the piano. Thrilled by blues and rock music, he also taught himself to play the guitar - although the mentioned genres were already interpreted on the keys before, with his quick fingers of course. As vocals had always fascinated Bernd, he got into the singing lane and is still on it these days. But all of this took place long before he plucked the thick bass strings. He first got in touch with this instrument as his brother needed an accompaniment for a competition. Since then, he’s got the passion for the boom. So breaking all the limits… On top of singing, playing the guitar, bass and keys, he also masters the hammonds and blues harp as well in „Prologue Noise“, a band put together between him and his brother, as well as in White Blossom Project. 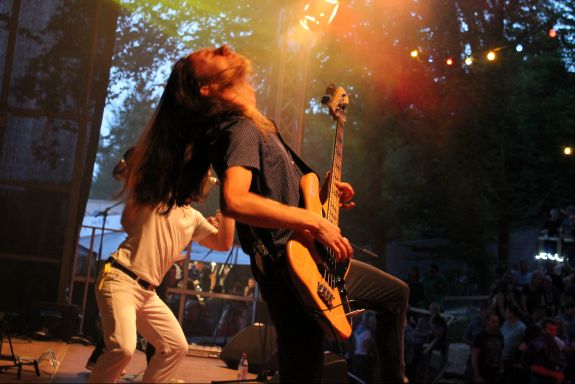 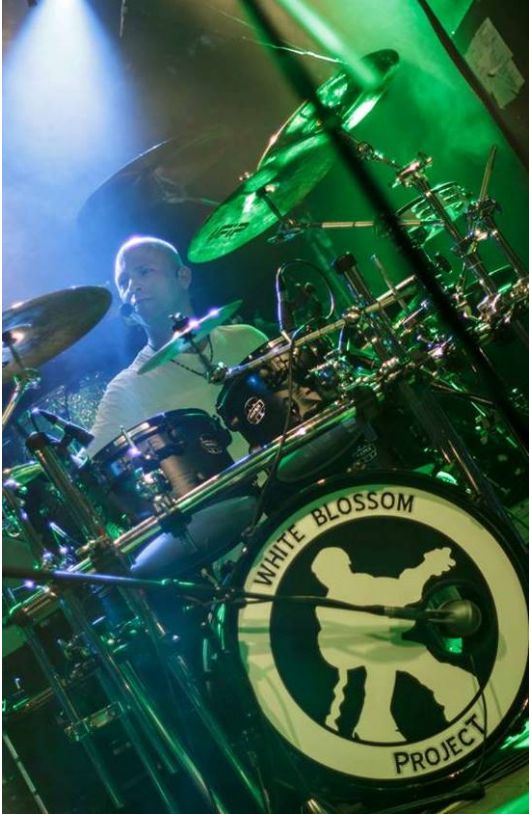 Mike Sorel, 41 years old and drummer of White Blossom Project. A power-loaded guy who got in touch with music at the young age of nine. And at first, of course: with the drums. Mike is an original New Yorker and came to Germany at the age of 19 as a soldier of the US Army. In 1996, Mike decided to teach himself to play the acoustic guitar. He began to write his own songs and sing. In 2004, the logistics and supply chain manager took a more than ten year break from the stage in order for him and his wife to be able to focus on the upbringing of his three kids. By way of unbelievable coincidence, Mike became the front man of a cover band and could finally use his pipey voice as a lead singer. A bit later, the ambitious entertainer found his way to WBP through a small classified ad and is now not only doing the drum work but still singing and playing the acoustic & bass guitars for WBP. Aside from White Blossom Project, Mike rocks with his best friend Sven in a duo for classic cover songs and they're well known as "The Red Bottle Necks". Mike lives by the motto: “Miraculously, the path that you wish to walk upon will appear underneath your feet, with each further step you take”. 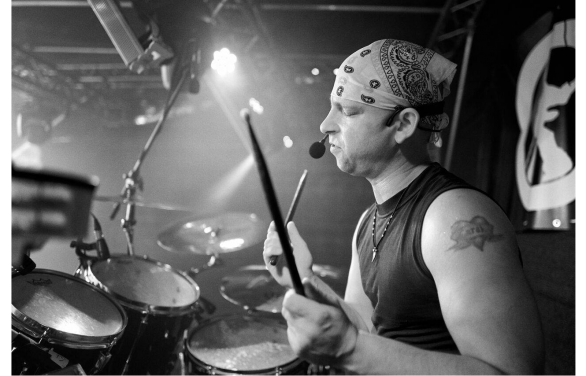